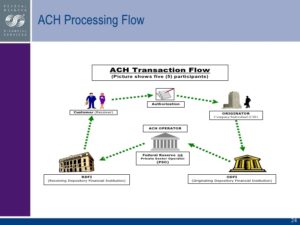 NACHA, a non-profit industry group charged with managing the Automated Clearing House (ACH) system has also made moves to ensure faster payment solutions, working to speed up ACH payments. In many ways, the efforts of NACHA and the Federal Reserve are complementary rather than competing. However, NACHA has expressed concerns the Fed’s interest in establishing faster ach processing speeds. While the clearing house giant supports the exploration of faster and more efficient payment solutions, the Fed’s proposal, according to NACHA’s chief operating officer Jane Larimer, “represents a significant departure from the Fed’s history of making its interbank services open and available to all payment systems that want to use it.

NACHA maintains its stand: it does not suggest that the Fed abandons a real-time payment system, and “does not have a specific opinion on whether the Fed should build such a system”. But according to the letter, the association suggests the Fed could support existing payment systems to ensure more efficient public service through an expanded settlement-service operating hours. Should the Fed really be in the business of developing unique settlement systems?

Defining the Role of the Federal Reserve in Faster Payments

Like many other economies around the world, the U.S. economy is undergoing rapid changes as tech providers look to develop new systems that make exchange of funds faster, safer, and easier. As this evolution continues, the big lingering question is what role does the Fed play?

David Sapanero, chief operating officer of the Federal Reserve, says that the Fed views its major role as an institution that helps to ensure the “integrity, efficiency, and accessibility” in payment systems. In the past, the Fed has helped in the evolution of payment systems in the U.S., and is still doing so. Upon the request of the Faster Payments Task Force, a group made up of payment industry stakeholders and executives, the Fed is taking steps to determine if it can enhance any of its settlement services to support the faster payment systems evolution. Most recently, a public feedback process was initiated to determine whether the Fed should create a 24/7/365 real-time settlement services.

NACHA’S comment is one of the 45 on Federal Reserve web platform, and other commenters on the site express their support for a real-time payment system developed by the Fed. Consumers and businesses are eager for faster payment processing, and both groups are willing to work with the most viable option in the financial industry. As the Fed evaluates the contributions of stakeholders in the industry, Sapanero says it will consider “one, will the new service yield clear public benefit; two, is the service one that the private sector, if left to its own devices can’t get to a good place; and third, can we recover our costs in the long run?”

Traditionally, ACH payments take two to three business days for the completion of the process, and weekends/holidays can further slow the process down. With the increasing demand for faster payment systems, however, NACHA has explored the corporate use of Same Day ACH services. 84 percent of banks say they have already originated the same day ACH services for mid-sized firms, while about 58 percent say they had applied the services for large organizations.

Faster ACH payment processes is now on the horizon. As implementation plans are rolled out over time, there will definitely be challenges. However, as the demand for faster payment systems continue to increase, there will be more positives too. According to the NACHA president and chief executive Jan Estep, same day ACH payments is one that is “meeting needs today” and it is also “a set of building blocks for the future”.

Slow payments can be especially frustrating for working class persons who do not have direct deposit. A delayed paycheck can wreak havoc, destabilizing workers without financial cushions and forcing them to rely on credit, bounce checks, or even lose control of overdue bills. Those who need to make bill payments at the last minute face uncertainties concerning the completion of the payment process before late fees set in.

These issues have plagued the U.S. for years. Economic powerhouses such as the United Kingdom, Mexico, Australia, Brazil, and Singapore have implemented advanced payment networks that allow transactions processed in minutes or even seconds. At long last, however, the U.S. is set to have a new, state-of-the-art payment system. To ensure a smooth and seamless process, the Federal Reserve is bringing stakeholders to the table, with its focus on developing an advanced framework that can support faster payment technology solutions.

The quest for faster ACH processing payments has been a long time coming – and its eventual implementation is going to be well worth the wait.